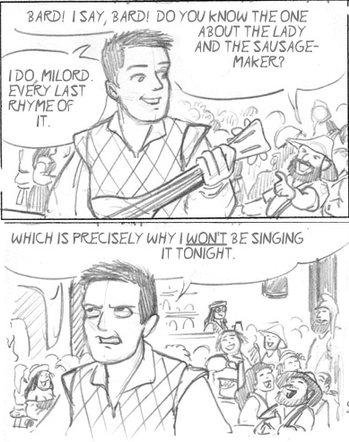 A song or poem which includes ribaldry for purposes of bonding and general letting-off-steam. May also be called a Barrack-room Ballad, a Rugby Song or a Hash Hymn. The level of ribaldry may range from mere Double Entendre to the kind of explicit lyrics that send Moral Guardians into conniptions.

Such songs are sometimes used as a Curse Cut Short, a character will be singing a well-known bawdy song and cut off a split-second before actually singing anything obscene. Including snatches of bawdy songs in a scene indicates that characters are becoming relaxed and uninhibited (at the very least). If the song happens to be something as explicit as "The Good Ship Venus"

or "Barnacle Bill the Sailor,"

they are probably way past just "relaxed".

An unseen incident of the singing of a bawdy song may be used to indicate that someone was drunk and disorderly or otherwise "out of order", especially if children, nuns or The Vicar happened to be present. Allusion to the vicar knowing such a song is a deliberate example of incongruity. Rick the Vic from Hellblazer probably knows them all.

In order to indicate that an older character is a "bad influence" on children, a child may sing a bawdy song after visiting him/her. In such cases the chosen song is usually one of the less explicit examples, "Roll Me Over in the Clover," for example.

Many bawdy songs are themselves trope-laden, being replete with stereotyped characters, "wardrobe malfunctions", slapstick and cliches. Many are also examples of pastiche and parody or possibly Fan Fic, being set to the tune of "real" folk songs, pop songs etc.: for example, "Irian Jaya" to the tune of "Mull of Kintyre," "Masturbation" to "Alouette", "Incest Is Best" and "Bestiality's Best" both to the tune of "Tie Me Kangaroo Down, Sport". Sometimes even national anthems ("Life Presents a Dismal Picture" to "Deutschland Über Alles" and "Ou Est La Papier" to "La Marseillaise"). Prisoners at Colditz Castle in World War II had a lot of creative fun re-writing the German national anthem; the mildest version they came up with was "Deutschland, Deutschland Ünter Alles".

These are often... in fact, almost always... sung when the character doing the singing is totally plastered.

For professional musician's songs with sexual themes, see Intercourse with You. Compare the Sound Off, which is similar in that it can be quite rude and is typically a piece of oral tradition, but is somewhat less musical. A Limerick is a short poetic form that also often can have a bawdy theme.