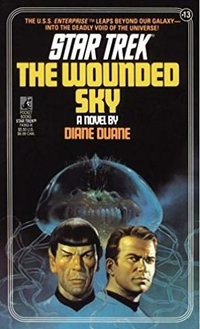 The Wounded Sky is a novel of the Star Trek Expanded Universe by Diane Duane, first published in 1983.

The USS Enterprise, under the command of Captain James Kirk, is assigned to test a new space drive that promises to far outstrip the warp drive. During the test, the ship is attacked by Klingons, and then faces a much greater problem when it becomes clear that the new drive is damaging the fabric of space itself.