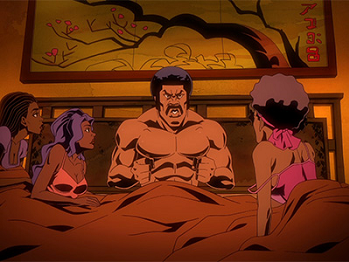 There are many ways for a man to express power. One of them is having several women in his bed, presumably there for more than just body heat and implying the man also has the sexual stamina to deal with that many women. The man will never be in the bed with them, of course—he's off at the balcony or window, brooding about the plot.

Note that we never see the bed before or during all the presumed action—only the aftermath, with the women asleep and the man awake. One woman may wake to converse with him, but only one. How much the sheets cover or how much the women are wearing depends on what rating and audience the media is targeting.

Compare Sexy Man, Instant Harem, The Pornomancer, and A Lady on Each Arm. The ladies may be members of a Royal Harem. A subtrope of Men Are Tough and Women Are Delicate: in this case, sexual prowess is equivalent to toughness/power and a multitude of women are submissive to the dominant man.