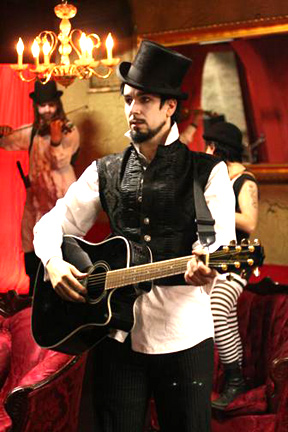 Aurelio Voltaire Hernández (born January 25, 1967) is a musician, animator, and comic book artist popular in the Goth scene and among Anime and Sci-Fi fans. Lately, he's been crossing over into Steampunk. His most popular songs include: "BRAINS!" note  Remember that episode of The Grim Adventures of Billy & Mandy with the brain-eating meteor? Yeah, that was him. He also sang the opening theme "Land of the Dead" from the movie, Billy & Mandy's Big Boogey Adventure. and "When You're Evil." Most of his songs poke fun at the New York City goth scene, and anything else he either loves (Star Trek and Star Wars) or hates (New Jersey).

He was born in Havana, Cuba. His family moved to Jersey when he was a child (which he hated) and currently lives in New York City. He does claymation, mainly channel I.D.s, which he started when he was only 10 years old. He currently teaches Stop Motion animation at The School of Visual Arts in NYC when he's not touring.

His music is mainly satirical, but some of his songs can be quite serious and deep. Most of his songs have a Folk Music feel to them, though he often breaks genre barriers, going into Jazz, Country, even Rap.

It's also the name of one of history's most celebrated essayists, philosophers, and writers. But who cares about that? He does. A lot. In 2010, he started to use his first name with it, so to find his later work on iTunes, Pandora, Spotify, etc., you have to search for Aurelio Voltaire. He did this due to people making new bands with Voltaire in them, and so his fans can find him easily. He said on his official Facebook page:

"I got tired of there being other people releasing albums as Voltaire. There's an indie band in Germany and some American guy who makes instrumental hip-hop. Like, do these people not do a fuckin' Google search before naming their bands? Anyway, it was just easier to distinguish myself from them by using my first name."
Advertisement:

Voltaire married his long-time girlfriend, Jayme, on October 1, 2009, at the Angel Orensanz Center in New York City. Voltaire has a son, Mars, from a previous relationship, born in 1998. On September 25, 2013, Voltaire announced on his official blog, that he and his wife are getting divorced, just short of their 4 year anniversary.

Voltaire has also become an active YouTuber, and his "Lair of Voltaire" can be found here,

where he uploads music and vlogs (which he calls "Nooseletters"), as well as a home decorating web series titled Gothic Homemaking, all delivered alongside his literal Deadpan Snarker friend/corpse Orville Deadenbacker.

Tropes that describe him, his music, and his animations: