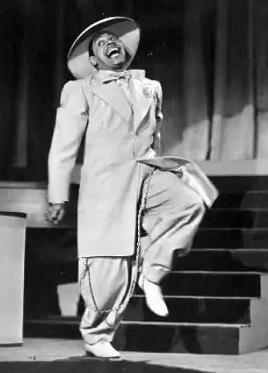 Cabell "Cab" Calloway III (December 25, 1907 – November 18, 1994) was an American Jazz singer and bandleader. His band, originally called The Missourians, was one of the most popular African-American big bands of the 1930s and 1940s. Calloway's band featured trumpeters Dizzy Gillespie and Adolphus "Doc" Cheatham, saxophonists Ben Webster and Leon "Chu" Berry, New Orleans guitar ace Danny Barker, and bassist Milt Hinton. Calloway continued to perform until his death in 1994 at the age of 86.

His impact on today's popular music reaches deep. In his own words; "You see this rapping they're doing today, I did that 25, 35, 45, 55 years ago!" Indeed, even the rotoscoped animations of his dance moves done for Betty Boop cartoons in the 1930's show him doing the moonwalk some 50 years before Michael Jackson would make it popular.

In a word, he was cool before the 'old school' was even built.

Modern audiences probably know him best for his performance of Minnie the Moocher, his most popular song, in the 1980 movie The Blues Brothers. In his prime he was best known for performing at The Cotton Club in Harlem during the 1930's. He was among the first African-American celebrities in an age when performers in blackface were still the norm, breaking new barriers and paving the way for nearly every black performer to come.

Tropes pertaining to him and his music include: