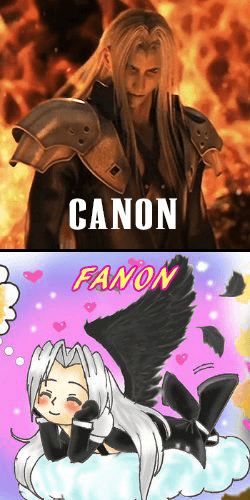 Were they playing the same game?
"I guarantee you Satan's going to have no problems on this planet because all the women are gonna go 'What a cute butt!' He's Satan! 'You don't know him like I do.' He's the prince of darkness! 'I can change him.'"
— Bill Hicks, Pussywhipped Satan
Advertisement:

Where Ron the Death Eater is taking a good character and making them evil, Draco in Leather Pants is when a fandom takes a controversial or downright villainous character and downplays their flaws, often turning them into an object of desire and/or a victim in the process. This can cause conflicts if the writers are not willing to retool the character to fit this demand.

In fanfiction, they are frequently the love object of the local Author Avatar, who uses the power of love to redeem the character. "I can fix him" is a commonly expressed sentiment among fans of Dracos in Leather Pants. In extreme cases, the affection these characters receive from fans can lead them to forget that they're actually still supposed to be villains. Or, on the flip side, even the worst crossings of the Moral Event Horizon can be rationalized, while any insult from the hero towards the villain is cast as deplorably mean. The writer's attempt to make the villain more "sympathetic" will likely cause them to remove everything that made the character so cool/well-liked in the first place.

Common reasons for this include the character being wicked in a classy or cool way. A physically attractive villain is much more likely to be subject to this trope than a physically ugly one; Beauty Equals Goodness, after all, and shallow as it may be, it seems that, for some fans, this is the case even when the character's beauty only extends to their appearance. All Girls Want Bad Boys may be a factor with male villains getting a female fandom that views them through this lens. A badass villain will naturally be preferred by many of these over meeker heroic characters at times, as well. Though these aren't the only reasons why fans could do this.

Some villain archetypes, such as the Smug Snake (because of their off-puttingly arrogant personality), female villains (because it's mostly Fangirls who invoke this trope) and the Complete Monster (because of the severity of their evil deeds and absence of redeemability) are rarely susceptible to this, but it can still happen.

Jerkass Dissonance usually plays a part in this trope; it is much easier for people to forgive and overlook the negative qualities and stress the Freudian Excuses that form a sympathetic back-story for fictional characters than it is to do the same for people in real life, because the actions of the fictional character have no real-world effect.

Expect also for fans to make excuses for the character not getting any comeuppance for their sins, and, for bonus points, gloat if one of their hated and/or villainized characters gets the short stick instead, especially if the latter is the victim of the former. Double with Ensemble Dark Horse if it was a minor vilain who gets this treatment. If the character is a leader of any sort, expect their fans to declare that The Extremist Was Right.

Named for a term in the Harry Potter fandom, for the most sympathetic Fanfic portrayals of Draco Malfoy, who, in Canon, is a petty, smug, elitist Spoiled Brat. (The term originated in Hurt/Comfort Fics, where Draco was the comforter and Ron was the abuser, usually with Hermione being the victim. Note the term was also used by fans of such scenarios as a completely self-aware guilty pleasure.)

Disturbingly, sometimes Truth in Television — but we won't go into that. For literal antagonists in leather pants, see Hell-Bent for Leather.

Red from Overly Sarcastic Productions, talks about Paradise Lost, and how it was one of the main reasons, behind Satan's shift from a demonic looking monster, to the more attractive, human version that are more common these days.

Red from Overly Sarcastic Productions, talks about Paradise Lost, and how it was one of the main reasons, behind Satan's shift from a demonic looking monster, to the more attractive, human version that are more common these days.