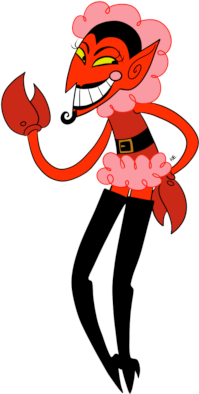 The Sissy Villain, as his name would suggest, is a man whose heart is as twisted as his wrist is limp.

Frequently, The Hero pitted against the Sissy Villain is either a manly man (any feminine traits he has are merely there to underscore his masculinity) or a tomboy, and making the villain "unmasculine" is intended to emphasize this. After all, there's nothing manlier than beating up a sissy. It doesn't even matter that the limp-wristed villain is powerful, he looks weak and homosexual and that's what matters.

The Sissy Villain is probably the second most common portrayal of Camp Gay men (besides "one-dimensional joke character") but is not necessarily synonymous with Depraved Homosexual. While Sissy Villains are frequently gay or bisexual, most of them are merely sexually ambiguous or seemingly asexual, and some of them are straight. The Sissy Villain isn't intended to creep out the audience just because of the implication that he might like men (although this occasionally factors in), but because he acts like a real wimp. Either way, he's Always Camp.

There is a weird bit of irony to this: regardless of what the villain looks or acts like, Evil Is Cool, and these villains (assuming they're worth their salt) will wreak just as much havoc as any other archetype. So, overexposure to this trope may lead kids to see this personality as badass in its own way, even leading boys to imitate their behavior and mannerisms.

This trope shows up mainly in Western works and those Japanese works aimed at a male audience; if the villain is presented as certain kinds of swishy, female fans are likely to declare him utterly fabulous.

Sissy Villains show up frequently in anime, where they often have white hair. Two common subtropes are Creepy Crossdresser and Eunuchs Are Evil. See also Fashion-Victim Villain, Gorgeous George, Depraved Homosexual, Depraved Bisexual, and Psycho Lesbian. May sometimes overlap with misogynistic views in the context of the Effeminate Misogynistic Guy. Contrast Real Men Wear Pink, and occasionally, Evil Sounds Deep. When his ambiguous (nor not so ambiguous) sexuality is Played for Laughs, that's Queer People Are Funny. Not to be confused with Non-Action Big Bad, although they can overlap. If the villain in question is either Satan himself, or one of his minions, he's a Flaming Devil.

The Distaff Counterpart is Nothing Nice About Sugar and Spice.

Note: An Agent Peacock is considered badass, even though you wouldn't expect it at first. A Sissy Villain emphasizes his viciousness through feminine behavior. The tropes can overlap, especially when Agent Peacock is evil.

Since quite a few women actually find effeminate men attractive, this can also lead to Evil Is Sexy.

The worse version of James.

The worse version of James.