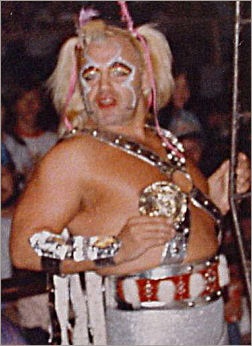 Adrian Street (born 5 December 1940) is a retired Welsh Professional Wrestler who competed from the 1950s all the way into 2010 primarily as "Exotic" Adrian Street. He started his career as Kid Tarzan Jonathan and also wrestled as Hell's Angel #1. He developed his outrageous image, he claims, sort of by accident since he had been getting such a good reaction from the character. He wrestled for decades all over the world. In the U.S., he competed in Memphis, Florida, the Mid-Atlantic, Los Angeles, Mid-South, the Continental territory in Alabama and for the Global Wrestling Federation in Dallas as well as many independents. Among his in-ring achievements, he held the Mid-South Television Title

. In 1986, he won The Wrestling Observer Newsletter's "Best Gimmick" Award.

Not to be confused with similar wrestler Adrian Adonis.

"Imagine what my tropes could do to you":