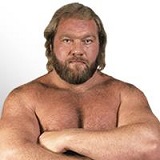 John William Minton (February 19, 1948 – March 20, 1995) was an American Professional Wrestler from Burke, VA best known for his work in WWE in the 1980s as Big John Studd. He debuted in 1972 as Chuck O'Connor and also wrestled as Captain USA. He had his most famous feuds with André the Giant and with Hulk Hogan. He retired in 1989 after a second run with Andre this time with Studd as a face and Andre as the heel. Along with WWE, he also competed in the AWA, for New Japan Pro-Wrestling, in World Class, in Florida, Georgia and other territories. He passed away from liver cancer, Hodgkin's Disease and ALS. Among his in-ring achievements, he was a 1x WWE World Tag Team Champion

as a member of the masked Executioners with Killer Kowalski, a 3x NWA Mid-Atlantic Tag Team Champion

"These tropes are associated with the true giant of wrestling, Big John Studd."