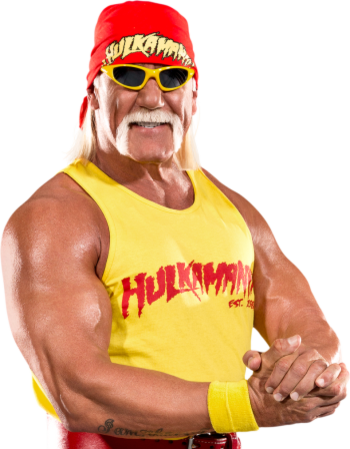 His name is synonymous with wrestling, BROTHER.
AND WHATCHA GONNA DO, TROPER, WHEN HULKAMANIA AND THE 24'' PYTHONS RUN WILD ON YOU?!
Advertisement:

His given name is Terry Gene Bollea (born August 11, 1953 in Augusta, Georgia). You know him better as Hulk Hogan. If the name doesn't ring any bells, you were either born after the Turn of the Millennium or you've been living under a rock since The '80s. To put it simply: Hogan is the single most famous professional wrestler to ever lace up a pair of boots, as even his industry rival, Ric Flair, has reluctantly admitted.

Hogan, like most great wrestlers of the 70s and 80s, made his name largely overseas, and then later gained major fame in the US in the AWA before being signed by the WWF. Simply put, Hogan is the guy who made wrestling go mainstream. Vince McMahon had the dream, but Hogan had The Face and the push for nationalization would not have worked without him. Moreover, Hogan was already a household name by 1983, with his memorable cameo in Rocky III and numerous interviews on talk shows worldwide.

It was when Hogan faced allegations of steroid use, took his act to Hollywood (see below) and later joined WCW that he ran into problems. In 1993, WCW was still an old-fashioned Southern-style wrestling promotion, and introducing a superhero like Hogan (and even campier villains) never quite clicked. But Hogan still had one last card to play: He took the plunge and turned heel, betting the novelty of "Evil Hulk" would be enough to get by. He was right. "Hollywood" Hulk Hogan was born at Bash at the Beach '96, and wrestling history was thrown into a Darker and Edgier era, which forced WWF to come up with a change of their own, known as "Attitude".

Hogan would don the red and yellow once again by 1999, but the diminishing returns of the nWo angle and numerous business and creative failures led to WWF (now WWE) buying out WCW. He has maintained an infrequent presence on TV, alternating between Reality TV star and General Manager of TNA Impact.

He served a three-year suspension starting in 2015, as racist comments made during a sex tape came to light and led the WWE to attempt to scrub him from their history; however, he was reinstated in 2018.

After all, no matter what you say about him, he's still Hulk Hogan.

Hogan has appeared or starred in over a dozen films, which is not to call him an actor. Under his belt are such classics as No Holds Barred, Suburban Commando, Mr. Nanny, Santa with Muscles, Three Ninjas: High Noon at Mega Mountain (listed on IMDb's "100 Worst Movies") Thunder in Paradise and more.note Plus several cameos or guest roles in TV series such as The A-Team, Baywatch, Walker, Texas Ranger and Suddenly Susan This opened the door for other WWE alumni to have film and TV careers, but only The Rock has equaled Hogan's cinematic output. (Although Batista and John Cena are sneakily trying to catch up.)

His in-ring achievements are also a need-to-know topic amongst Marks and Smarts alike, he is a former NWA Southeastern (Continental version) Heavyweight Champion

(Both, the longest combined and individual reigns in the promotion) and a former WWE World Tag-Team Champion

(w/Edge). He is also member of The Professional Wrestling Hall of Fame and Museum

Ladies and gentlemen, please note: Hulk Hogan is our page picture for both Heel and Face.

Hulk Hogan is the Trope Namer for: