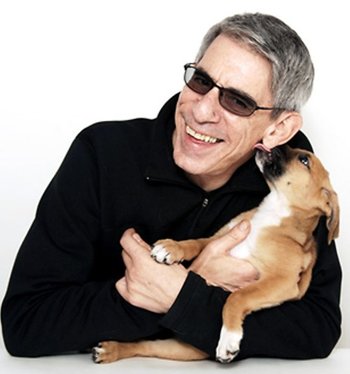 Belzer and friend, from a 2006 ad shoot for the Little Shelter Animal Adoption Center.
Advertisement:

Richard Belzer (born August 4, 1944 in Bridgeport, Connecticut) is an American actor best known for playing the character John Munch. He is otherwise best known as a stand-up comedian (look for his 1997 album/HBO comedy special Another Lone Nut) and author (among the titles he's written are How to Be a Stand-Up Comic and the fiction novels I am Not a Cop and I am Not a Psychic).

He is Henry Winkler's cousin.

We would show you a page of stuff he's done, which doesn't just include playing John Munch in fifty different shows over the course of several decades, but we don't have such a page prepared yet so you might as well go to the John Munch page instead.

Some of the non-John Munch acting roles include: