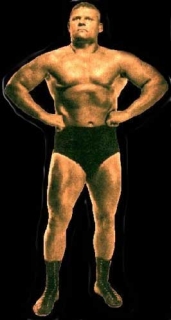 Reginald Lisowski (July 11, 1926 – October 22, 2005) was an American Professional Wrestler from Milwaukee, Wisconsin as The Crusher. He is best known for his work in the Midwest, particularly for the AWA, from the 1950s until he retired in the 1980s. He is especially known for his years of teaming with Dick the Bruiser. He competed for various National Wrestling Alliance territories, for All Japan Pro Wrestling, for Stampede, and even for WWE as "Crusher Machine." He retired in 1988. Among his in-ring achievements, he was a 3x AWA World Heavyweight Champion

. He was inducted into the Wrestling Observer Newsletter Hall of Fame in 1996.

The Crusher is notable for several innovations in professional wrestling. He was one of the first "tweeners," frequently brawling and using "bad guy" tactics as a fan favorite at a time when babyfaces were lauded for their scientific wrestling backgrounds. His bleached blonde hair, bodybuilder physique, and flamboyant interview style also became something of a prototype for future "superstars"and was built upon by wrestlers such as Billy Graham, Jesse Ventura, and Hulk Hogan. Not the very least was his beer-swilling badass persona, brought into the modern era to mainstream audiences by "Stone Cold" Steve Austin. Appropriately enough, Austin's famous "Austin 3:16" promo was delivered at the MECCA Arena; the same building The Crusher sold out on a regular basis decades earlier.

Not to be confused with Jerry "The Crusher" Blackwell nor with the villain in the Bugs Bunny short "Bunny Hugged."

"READ THE CRUSHER'S TROPES, YOU TURKEYNECKS!":