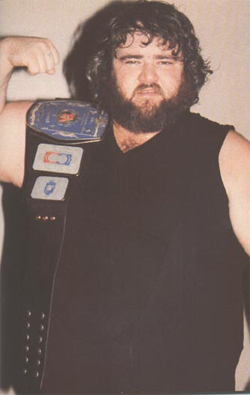 The Mountain from Stone Mountain.
Advertisement:

Jerry Blackwell (April 26, 1949 – January 22, 1995) was an American professional wrestler best known for his work for the American Wrestling Association during the 1980s.

He debuted in 1974 and wrestled for various National Wrestling Alliance territories, as well as for the WWWF, World Class Championship Wrestling and All Japan Pro Wrestling. He retired in 1989, and died on January 22, 1995 at the age of 45, due to complications from injuries sustained from an automobile accident.

As usual, you can find the basics at his page

"The Tropes From Stone Mountain":