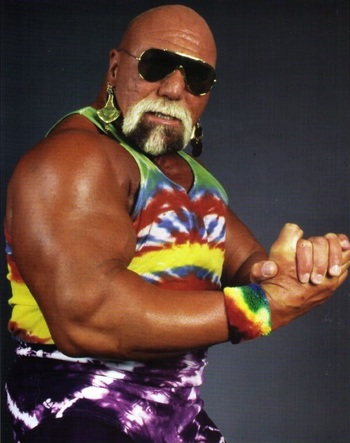 Eldrige Wayne Coleman (born June 7, 1943) is a retired American Professional Wrestler from Phoenix, Arizona who competed from 1970 to 1987 as "Superstar" Billy Graham. He debuted as Wayne Coleman in 1970 in the Stampede Wrestling promotion after training under Stu Hart. He would go on to compete for the AWA, New Japan Pro-Wrestling, various National Wrestling Alliance territories, and, most famously, for WWE, then the WWWF. He is best known for introducing a heavily muscled appearance, from his bodybuilding career, that had not previously existed in wrestling, colorful clothes and an over-the-top personality with rhyming promos. Unfortunately, the same steroids that helped give him his impressive physique ultimately wrecked his health, leading to his retirement in 1987. Among his in-ring achievements, he is a former WWE World Heavyweight Champion

"These are the tropes of the hour, the tropes with the power, too sweet to be sour":