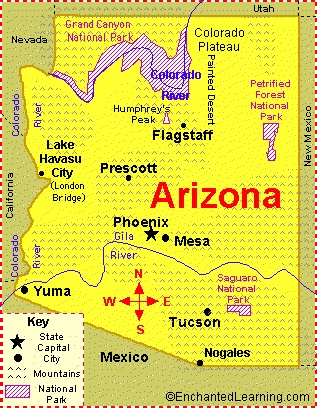 Bobby: 111 degrees?! Phoenix really can't be that hot, can it? [steps outside the truck] Oh my God, it's like standing on the sun!
Peggy: This city should not exist. It is a monument to man's arrogance.
— King of the Hill
Advertisement:

Arizona, the 48th and last state admitted in the contiguous United States, celebrated its centennial in 2012. It's known as the home of the Grand Canyon, the Saguaro cactus, and the Sonoran Desert, plenty of other noteworthy attractions... and for being really hot. Really, really, really hot.

Despite its stereotypical image as a big empty desert, Arizona is one of the fastest growing states in the Union. Its capital, Phoenix, is already the fifth-largest city in the United States, the tenth largest metro area, and is the biggest capital overall.note For folks not from America, it's sort of an American tradition for the state capital to be a dinky small-to-mid-sized city that nobody's ever heard of. Of 50 states, only 14 have capitals that are also the largest city—and of those, there are only eight or nine (Phoenix; Boston, Atlanta, Denver, Indianapolis, Oklahoma City, Salt Lake City, Honolulu, and arguably Columbus) that anyone out-of-state has really heard of—and the last one happened by accident (both Cleveland and Cincinnati used to be larger). The mining industry fuels commercial growth throughout the state, where the predominant mineral extracted is copper, earning the state the nickname "the Copper State". However, as copper has declined, the real economic powerhouse has increasingly become real estate. Arizona is also known as a major state for retirees to move to so they can avoid winters in the Midwest or Northeast of the United States and also the hurricanes and humidity of Florida, and much of Arizona's tourism industry caters to them.

Speaking of the natural features, the Grand Canyon is among the grandest canyons in the world, being 277 miles long and up to 18 miles wide and featuring some truly incredible vistas.

The state of Arizona has had one ship of the United States Navy named in its honor, the battleship USS Arizona (BB-39). If you've ever seen footage of the Japanese attack on Pearl Harbor, you have likely seen footage of the Arizona's forward magazine exploding, resulting in the loss of the ship and 1,177 of her crew. The ship itself has a Grey's Anatomy character (Dr. Arizona Robbins) named for her.

Here are some towns, cities, and areas of note:

open/close all folders
Advertisement:
Northern Arizona
Central Arizona
Phoenix Area
There's a reason this area of the state is called the Valley of the Sun: It experiences some of the high temperatures in the state, particularly during summer (the highest temperature ever recorded in Phoenix was something like 128º Fahrenheit —just over 53° Celsius). Contrary to time-worn assertions of out-of-state retirees who come to avoid harsh winters that "at least it's a dry heat", Phoenix and its surrounding cities usually experience a few weeks of humidity during the annual monsoon season.

Probably of note is that local residents frequently distinguish between the East and West Sides of the Valley; the East Side is generally seen as tonier, cleaner, less disreputable, and also wimpier than the West Side, largely thanks to the East Side having Scottsdale, Chandler, and Mesa (q.v. all below).