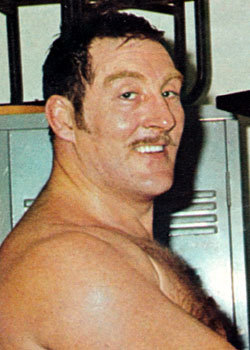 The master.
"He could hook you and do things with you from any angle, whether he was on top, underneath, standing up or laying down. He was just phenomenal."
— Roger "Nature Boy" Kirby about Karl Gotch
"I was so glad when Karl quit going to judo and jiu-jitsu. It was so hard washing everyone else’s blood from his gi every night."
— Attributed to Ella Istaz, Gotch's wife
Advertisement:

Karl Gotch (August 3, 1924 – July 28, 2007) was a German Professional Wrestler, known for his role in the development of Mixed Martial Arts in Japan. He was a former Greco-Roman and freestyle champion in Germany before moving to England to train Catch Wrestling in Billy Riley's Wigan Snakepit. Initially as Karl Krauser, he won several championships in Europe and toured in Canada and United States. His career was extensive in America, but he never got over due to his lack of showmanship, and ended leaving for Japan after an incident in which he and Bill Miller attacked Buddy Rogers backstage. In the land of the rising sun, however, Gotch turned out very popular thanks to his amazing skills, and over time was nicknamed "The God of Pro Wrestling". He worked in Japan Pro Wrestling training wrestlers in the art of catch wrestling, and also helped to establish New Japan Pro-Wrestling and Universal Wrestling Federation, tutoring names like Antonio Inoki, Yoshiaki Fujiwara and Satoru Sayama. Always a defender of realistic wrestling, he was very influential on the Japanese MMA, assisting to the creation of shootboxing, the Super Tiger Gym and Pancrase, as well as Muga Pro Wrestling. Gotch spent his last years in the "Gotch Dojo" in Tampa, Florida, where he passed away in 2007.

"The Godly Tropes of Pro Wrestling":