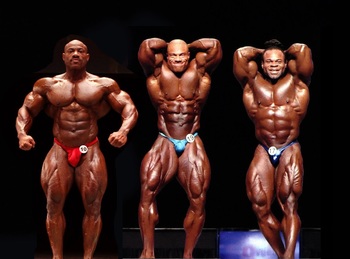 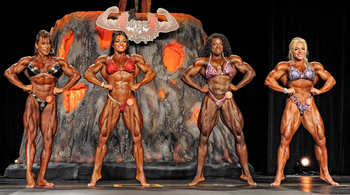 The sport where the words "muscle freak" come to mind whenever it is mentioned.

Simply put, bodybuilding is the sport of "building up" your body, and displaying your muscles. The first part requires a weight-lifting regime to build up muscle mass, while the second part involves the reduction of body fat so that the muscles themselves can be clearly seen. Unlike powerlifting or strongman, bodybuilding is judged by purely aesthetic criteria. It doesn't matter how much you lift in the gym, or exactly what training methods you used to get that physique; all that matters is how impressive you look when posing on stage.

So far, so good. So, where does the "muscle freak" part come in? Part of the answer lies in chemicals such as steroids and hormones. Just as steroids are abused by professional wrestlers, they are also abused by many bodybuilders who want to get even bigger muscles. When hormones and chemicals come into the equation, it is not hard to see how one can look physically like a "freak". Female bodybuilders are worse off in the sense that women produce less testosterone than men. If not managed properly, they can end up looking like female East German athletes, who were very masculine looking as a result of systematic doping. Note However, using testosterone or steroids without working out will not give you big muscles. You'll still need to do some serious weight lifting. Another thing is that sometimes, a few women can get big muscles naturally.

The other part of the answer is extreme reduction of body fat. Whenever you see bodybuilders at competitions, muscle definition is very important to them. No use building all that muscle if fat is covering them. Hence, it is common for competitors to do cardio workouts the week before the competition to burn fat. It is also common for competitors to starve or even dehydrate themselves before going on-stage to refine that sculpted look. However, fat has its uses in the human body, and extreme low levels of body fat over extended periods of time can be damaging to health. Again, female bodybuilders are more affected by this as the female body needs a slightly higher level of body fat than the male body in order to function properly. Also, as breast tissue largely consists of fat, extreme fat reduction will affect breast size. To counter this, some female bodybuilders opt for breast implants.

Bodybuilding is a highly personalised sport, which is affected by each person's genetics. The same diets, exercise styles, and drugs can give various individuals different results. Your Mileage May Vary.

These are the definitions of some of the main criteria by which contestants are judged and compared. Although they can be looked at separately to some extent, there is also considerable overlap and interaction between these factors.

Mass and conditioning are usually weighted more heavily in competition than aesthetics or posing because they are less subjective. Standards will be different depending on factors such as weight division, and whether or not strict drug testing is enforced.

At its heart, bodybuilding is a sport of comparisons. Sure, it's important to look good on stage by yourself, but you can't win or place well unless you're able to stand next to a bunch of other intimidating physiques and still make the judges think you're beating them.

When it comes time to do comparisons, whether in prejudging or in finals, the whole pool of bodybuilders in the show will be divided into different "call outs", where as few as two and as many as six bodybuilders will be called out to pose at the same time. The first call out consists of those whom the judges are considering for the highest placings, the second callout for the next several places down, and so on. If the judges decide one of the competitors looks too good (or not good enough) for the call out they're in, they can bump them up to a higher (or down to a lower) call out. After the bodybuilders in a call out go through the mandatory poses the first time, the judges may shuffle around who's standing next to who in the call out, and make them do the poses again so they can see a side-by-side comparison between people who weren't next to each other the first time. They can also winnow down the size of the call out as they go in order to better scrutinize the ones who are really neck-and-neck with each other.

Mandatory poses are those which the judges specifically call for, and use as their basis for judging in the comparison rounds. There are currently eight mandatory poses in IFBB men's open bodybuilding: four front poses, two rear poses, and two side poses. Other organizations and divisions such as NPC Women's Physique may omit some of these, usually the lat spreads and the most muscular. Bodybuilders also work the mandatory poses into their individual routines according to their preference. Also, there are certain poses where there's more than one correct way to hit it. Some names of bodybuilders are provided who showed good technique and/or embodied desired attributes in a given pose.

Actors or wrestlers with a background in bodybuilding:

Female bodybuilders are less frequently seen in media. If depicted, expect them to be portrayed as "freaks". However, some positive examples can be found.

Tropes involved in this sport: