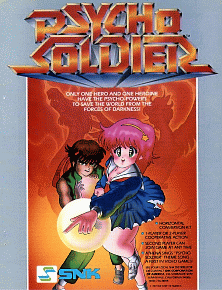 Fire! Fire! Psycho Soldier!
Athena's name is magic
Mystery... is what you see
Her crystal is the answer
fighting fair, to keep us free
She's just a little girl with power inside
burning bright
You'd better hide if you are bad...
she'll get you
She'll read your mind and find if
you believe in right or wrong!
— Psycho Soldier, the theme of the eponymous game.
Advertisement:

An action arcade game developed by SNK that was originally released in 1986 and internationally in 1987. Psycho Soldier stars Athena Asamiya, a descendant of Princess Athena from SNK's previous game Athena, and is noteworthy for being the first video game with a vocal in-game soundtrack.

Psycho Soldier is noteworthy for being the first video game to utilize a vocal track during in-game play, with vocals provided by Japanese pop idol Kaori Shimizu (not to be confused with the Japanese voice actress with the same name). This was achieved by creating a JAMMA board that was much larger than usual, and consists of three PCB boards hardwired together and sandwiched on top of each other inside the game cabinet. Her song made Athena one of the earliest video game idols in Japan. Both the Japanese and English-language versions of the game have different vocals for the main song.

The Japanese version of the song was released as a single in 1987 on a special cassette that was available only to those who purchased the Nintendo Famicom version of Athena in Japanese retail stores. The cassette also included a special vocal version of the ending theme.

Athena and Kensou would go on to be far better known as standards in The King of Fighters.

Not to be confused with Sociopathic Soldier.

Psycho Soldier has examples of: