Born in the Wrong Century 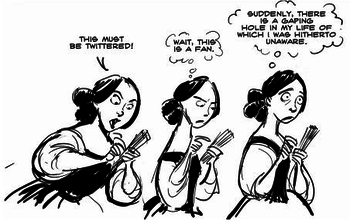 "Most people think Marv is crazy. He just had the rotten luck of being born in the wrong century. He would've been right at home on some ancient battlefield, swinging an axe into somebody's face. Or in a Roman arena taking a sword to other gladiators like him. They'd have tossed him girls like Nancy back then."
— Dwight McCarthy, Sin City, "A Dame to Kill For"
Advertisement:

There's a certain type of character who yearns for Ye Goode Olde Days, when things were more exciting, or simpler, or better in some other way. Or maybe they feel they'd fit in better in a time other than their own. Or maybe they're just history buffs and would like to have been around when all that history was happening. Maybe it's the romance they miss.

Or maybe the character is an inventor ahead of their time who just can't convince anyone that their crazy ideas could make a benefit for mankind, or a sci-fi buff who only wishes that all those stories about spaceships and flying cars were real, or a subculture waiting for the time when the world will be ready for them.

No matter what the reason, though, this character feels that they were born in the wrong century.

Characters of this sort often find themselves involved in Time Travel adventures — maybe they jump at the chance to test out some new time travel technology; maybe they're selected because their knowledge of the era will be useful to their fellow time travelers; maybe they just want to travel through time so badly that the fabric of spacetime folds itself for them for no adequately explained reason. Sometimes, these characters learn that the time they wanted to live in isn't so great after all, but just as often they don't. If so, they may choose to stay.

Note that this trope usually involves characters who live in modern industrialized democracies where they have a great deal of freedom and luxuries, which can make their nostalgia hard to take seriously. Characters from a crapsack country ravaged by plague, famine, or an evil dictator, are probably justified in feeling this way, but are rarely depicted unless they live in a future dystopia. Alternatively, like in the page quote, these characters are people who would like to return to a time when physical violence was a good pathway to fame and fortune.

Meanwhile, outside of science fiction and fantasy, characters like this are just stuck in the present day. Sucks to be them.

Such people do exist in Real Life, by the way; the time travel part, on the other hand, is probably not Truth in Television. Compare with Fan of the Past and Disco Dan. See also Nostalgia Ain't Like It Used to Be for cases governed by Nostalgia Filter or The Theme Park Version of Ye Goode Olde Days, and Original Position Fallacy if the character specifically imagines they'd be in power "where they belong": heroic examples of this trope usually accept that the era had flaws but love it anyway.

Born in the wrong decade

Collegehumor deconstructs his trope hard, pointing out the main downsides of living in a past decade, that are often overlooked.

Born in the wrong decade

Collegehumor deconstructs his trope hard, pointing out the main downsides of living in a past decade, that are often overlooked.