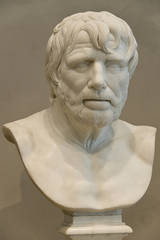 Hesiod was an early Greek poet, generally considered a contemporary of Homer. He is remembered for two works: the Theogony and the Works and Days. Both works heavily influenced later authors.

The Theogony is an account of how the world came to be and contains what is now the standard genealogy of the Greek gods.

The Works and Days is framed as a letter of advice to a lazy brother. It extols the value of labour and justice, while laying out an idealized calendar of tasks: sowing, harvesting, trading and so on. It is also the earliest appearance of the "Ages of Man", the decline from a Golden Age to the present-day Iron Age.