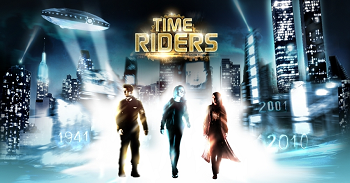 Mess around with time and the world you know... could become a world you don't.
" Time travel is a terrifying weapon, far more powerful than anything ever before conceived. Mankind just isn't ready for that kind of knowledge. We're like children casually playing with an atom bomb."
— Foster, TimeRiders
Advertisement:

Time Riders is a series of nine Young Adult science-fiction novels by Alex Scarrow. Three teenagers find themselves saved moments before death by a mysterious agency, who recruit them to travel through time to correct errors in history caused by tampering time travelers from the future. Eventually, the trio discovers that the agency has far more secrets hidden away than they had originally thought.

The book series contains examples of:

Alternative Title(s): Day Of The Predator, Gates Of Rome, The Doomsday Code, City Of Shadows