Literature / To All the Boys I've Loved Before

What if all the crushes you ever had found out how you felt about them … all at once? 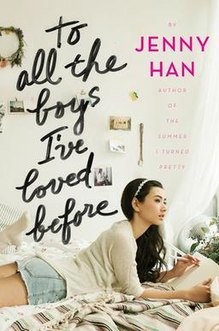 To All The Boys I've Loved Before is a young adult romance trilogy written by Jenny Han, first published in 2014. The novel is followed by two sequels, P.S. I Still Love You (2015) and Always And Forever, Lara Jean (2017).

Sixteen-year-old Lara Jean Song Covey keeps her love letters in a hatbox her mother gave her. They aren’t love letters that anyone else wrote for her; these are ones she’s written. One for every boy she’s ever loved—five in all. When she writes, she pours out her heart and soul and says all the things she would never say in real life, because her letters are for her eyes only. Until the day her secret letters are mailed, and suddenly, Lara Jean’s love life goes from imaginary to out of control.