Stranger in a Familiar Land 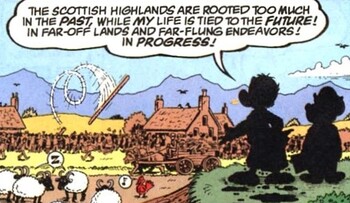 "Those first few weeks home from the war, I moved through the house like an astronaut lost in an alien landscape. Everything looked strange. Smelled strange. Even in the air. My family were bizarre creatures I didn't know how to communicate with. Was too afraid to even touch or look at them for long. This is supposed to be my home, I had to keep reminding myself. Hoping it would eventually start to feel that way".
— Frank Castle, Punisher Max #12, "Frank"
Advertisement:

A character returns home after a long absence and finds that they no longer fit in, either because their home has changed too much over time, because they themselves were changed by their experiences or both. In the second case, it can lead to a But Now I Must Go sentiment. In less extreme cases, the character may eventually settle down again with some effort.

Prominent real-life examples are usually based on soldiers returning home, most commonly from World War I or The Vietnam War, or prisoners who find after serving their sentences that they can't adapt to life "outside". This is also relatively common among anthropologists and related fieldworkers who come home after a long stint in another society only to realize how bizarre their own culture really is. Another common case is people who were raised in another culture who travel back to their family's homeland — despite sharing cultural ties due to their family's past, they experience Heritage Disconnect and find themselves alienated due to their foreign upbringing.

Present in Western literature as early as in Homer's The Odyssey, making it Older Than Feudalism.

Related to You Can't Go Home Again, Never Accepted in His Hometown, Going Native, and possibly So What Do We Do Now?. This experience may be part of causing the character in question to go From Camouflage to Criminal. Occasionally overlaps with Where It All Began. Contrast Home Sweet Home — although this trope may also make the character realize that his home is no longer the place where he used to live. He may find that his old bed is too soft and he now Prefers Rocks to Pillows.

Often, characters placed in this situation will choose to put themselves back In Harm's Way.

Has absolutely nothing to do with Stranger in a Strange Land.

WARNING: Below are unmarked spoilers aplenty!