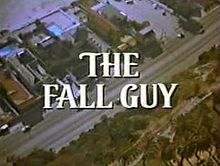 "I might jump an open drawbridge
or Tarzan from a vine
'Cause I'm the unknown stuntman
That makes Eastwood look so fine!"
— "The Unknown Stuntman

The Fall Guy was one of the first Action Series that made the genre popular in The '80s. It grants the people who do the dangerous stuff on set their well-deserved limelight, and while it's at it, it takes the occasional chance to lampoon Hollywood and also allows for loads of Cameos. It was created by Glen A. Larson, whom also served as executive producer, was produced by Glen A. Larson Productions and 20th Century Fox (this was his first series he didn't do at Universal), and ran on ABC from 1981-86.

What the show really is famous for is the car chases which always include Colt's truck doing a Ramp Jump and lots of wreckage.

The Fall Guy provides examples of: