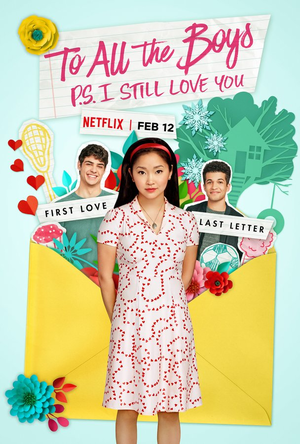 It's a new year, and Lara Jean Covey (Lana Condor) is excited to officially be dating Peter Kavinsky (Noah Centineo), but is conflicted and anxious about the pressure that comes with dating the most popular guy in school while still being herself. Things get complicated when one of the recipients of her other love letters, John Ambrose McClaren (Jordan Fishernote recasted from Jordan Burtchett), reenters her life, and Lara Jean finds herself torn: can she be in love with two boys at once?

With the exception of Israel Broussard's Josh, the rest of the first film's cast all reprise their roles. Ross Butler, Holland Taylor, and Sarayu Blue have supporting roles as Trevor, Peter's best friend, Stormy, an elderly woman who befriends Lara Jean, and Mrs. Rothschild, the Song-Coveys' neighbor, respectively.

. The film was released on February 12, 2020 on Netflix. It was filmed back to back with the final film in the trilogy, To All the Boys: Always and Forever, which came out a year later.