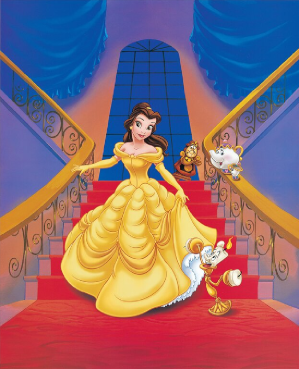 "Music up as every eye goes to the head of the stairs, the portières move and Mrs. Levi steps through, handsomely gowned, red hair done up magnificently on top of her head. She descends stairs as Waiters, etc. await her first words."
— Hello, Dolly!, stage direction preceding title song
Advertisement:

Maybe she's the Girl Next Door who's just gotten a makeover, and it's time to show her family. Maybe she's the Cinderella Expy making her grand entrance at the ball. Maybe she's just finally ready for her date. So how does she ensure her entrance 'wows' everyone there?

She'll appear at the top of a wide, sweeping staircase. (Bonus points for marble banisters, fancy new carpeting, or spotlights.) She pauses a moment, either at the top or a few steps down, so everyone has a chance to take in her beauty, how nice her face is, and her elegant hair and clothes (would even involve a Pimped-Out Dress in older stories). Once noticed, she slowly and gracefully descends.

Often this will be shown visually with the camera starting at the feet and slowly panning up the figure. When wearing a dress with a long skirt, stepping down gives her a chance to show off her shoes and legs without being immodest.

Often, but not necessarily, combined with She Cleans Up Nicely.

Compare Ending by Ascending, when a character goes up a staircase dramatically.