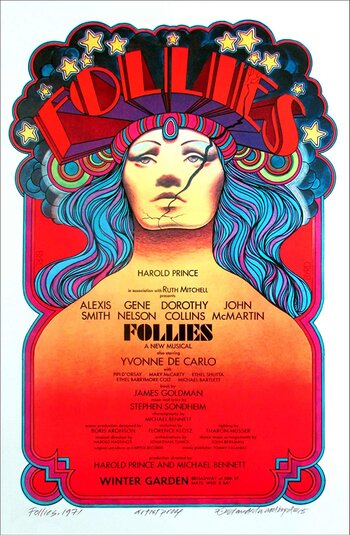 Follies is a musical with music and lyrics by Stephen Sondheim and a book by James Goldman, originally staged on Broadway in 1971 in a lavish production by producer Harold Prince and choreographer Michael Bennett, both of whom also co-directed.

The play follows a reunion at a Broadway theater where the "Weismann Follies" were staged decades earlier. The theater has been condemned and will be torn down in days, taking all of its memories with it. Showgirls of yore, now middle-aged or older, have gathered to perform their old numbers, variously nostalgic, contented, or confused. Ghosts trail the performers—the ghosts of their own younger selves.

However, the meat of the plot focuses on two middle-aged married couples. The women, Sally Durant Plummer and Phyllis Rogers Stone, are former chorus girls and friends who, in their youth, were courted by Buddy Plummer and Benjamin Stone, respectively. The foursome always met up after the curtain call. Both couples are now deeply dissatisfied with their marriages. Buddy, a traveling salesman, is having an affair with a girl on the road; Sally, who'd had a brief affair with Ben before he married Phyllis, is still as hopelessly in love with him as she was years ago, and so depressed that she can barely function. Ben is a super-successful businessman turned philanthropist, trying to hide his impending midlife crisis and nervous breakdown; Phyllis, meanwhile, feels abandoned by Ben—both emotionally and physically, due to his refusal to have children—and has turned outwardly cold towards her husband as a result.

The musical has two types of songs: character songs and pastiche songs, which are sung in-universe. The two types eventually come together in the last half hour of the show, in which each of the four major characters performs his/her nervous breakdown as a song.

Follies is considered by some to be Sondheim's masterpiece, though the play itself has had a long and bumpy road. The musical was an Acclaimed Flop when it debuted in 1971, resulting in Capitol Records releasing the cast album in a heavily-butchered single LP release as opposed to the original double-album set that was planned. A full soundtrack would not resurface until 1985, when the entire score was performed live for a charity benefit by a star-studded cast, which was released on CD (sadly the VHS and later DVD release focused mainly on the recording of the concert). The success of Sunday in the Park with George and Into the Woods gave Sondheim and Goldman the leverage to revive Follies in the UK in the late 1980s, where the play finally found commercial success. However, Goldman (who had long disliked the play's dark tone and downer ending) insisted on rewriting the play to give it a much more upbeat tone and ending.

Several short revivals followed (in 1998 and 2001) until 2011, when the play returned to Broadway and received a full-scale resurrection complete with a new two disk soundtrack which featured extended dialogue tracks to allow listeners to get the complete story.