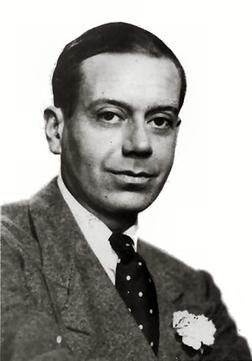 "My sole inspiration is a telephone call from a director."
Advertisement:

Cole Albert Porter (June 9, 1891 – October 15, 1964) was a writer of popular songs from the 1920s to the 1950s. He wrote for several musicals, mostly in the 1930s, that had very slim, loose plots. Those musicals were an excuse for beautiful women, comic gags, one-liners and, most of all, musical numbers. His most famous play is Kiss Me, Kate from 1948, which is about putting on a production of, believe it or not, The Taming of the Shrew, but his real claim to fame is his urbane, witty songs, like "I Get A Kick Out of You" and "Night and Day".

Porter is especially well known for list songs, like "Let's Do It (Let's Fall in Love)", "You're the Top" and "Brush Up Your Shakespeare". His songs have been recorded from the 1930s to the 1960s by such big stars of the time Fred Astaire, Ella Fitzgerald, Ethel Merman, Frank Sinatra, and Louis Armstrong. On a side note, Porter was gay, which shows in some of his songs that deal with things like forbidden, impossible or unrequited love.

Cole Porter's songs are examples of these tropes:

Cole Porter's work outside of his songs is an example of these tropes: