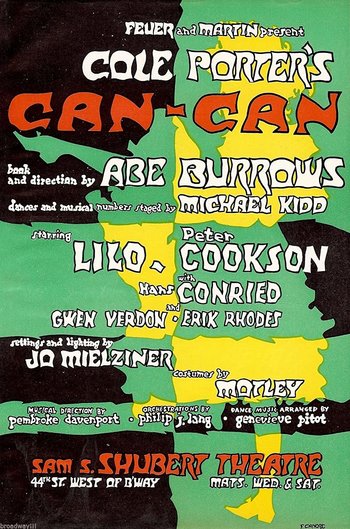 Can-Can is a musical with music and lyrics by Cole Porter and book by Abe Burrows, first produced on Broadway in 1953.

The story is set in Paris in The Gay '90s, when the Montmartre district is known for its starving artists and glamorous dance-halls featuring scandalous dances such as the famous can-can. The protagonists are Pistache, a former dancer who now runs her own dance-hall and boasts she never gives anything for nothing and has every policeman in Montmartre in her pocket; and Aristide Forrestier, a newly-appointed judge determined to clean up the district, starting by closing Pistache down. Aristide and Pistache fall in love, but have to struggle with mutual distrust and conflicting world views to reach a happy ending. A comedic B-plot features Claudine, Pistache's star dancer; Boris, Claudine's boyfriend who is a member of a colony of struggling artists; and Hilaire, an art critic whose pursuit of Claudine both encourage in the hope that he will help Boris's career.

Several songs from the musical, including "C'est Magnifique", "It's All Right with Me", and "I Love Paris", went on to independent success. A film adaptation was made in 1960, directed by Walter Lang and starring Shirley MacLaine, Frank Sinatra, Maurice Chevalier, and Louis Jourdan; it features a significantly different plot and characters.