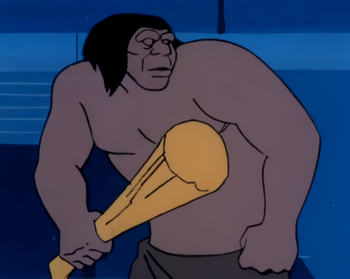 So simple that the animators did not feel the need to properly animate his eyes.
A makeshift stone club as ugly as it is effective. Primitive and heavy, it demands of its wielder a strong arm and a suitably barbaric disposition.
— Barbarian's Cudgel description, Salt and Sanctuary
Advertisement:

Clubs are not, generally speaking, the most sophisticated of tools. At their simplest, they can be nothing more than a stick torn from a tree and swung as a weapon. Clubs of this sort requires very little work to be made — there's no metalworking or complex manufacture involved, or any alteration save perhaps stripping off twigs. Thus, they're often seen and treated as the most primitive sort of weapon, and archetypally as the characteristic weapon of people and beings too primitive and barbaric to craft anything better.

Consequently, the typical fictional club is a fairly simple and crude affair, and is often little more than a simple, knotty branch or log. Often, however, it will be uncannily conveniently shaped to serve as a weapon, with a thin piece to serve as a handle flaring out into a bulkier head. The crudest examples still have leafy twigs and side branches attached; this may often overlap with Improvised Weapon when a character just rips off or picks up a branch to use as a club. The more elaborate ones may be enhanced with bones, worked stone heads or other simple, easily foraged-for materials to give them greater strength and hitting power. If more modern materials are available, it's not uncommon to see metallic objects jammed into a club as well. Some may just be giant femur bones with no additional embellishments.

The use of a club is often as simple and primitive as its manufacture. Clubs, being blunt objects, rely on sheer force of impact to damage opponents. They are also typically too poorly balanced, crudely made and awkwardly shaped to make use of any complex techniques or skilled wielding; a club isn't something with which you'll be landing trick shots or doing clever things with. Thus, club-wielding fighters are usually portrayed as fighting with crude, powerful blows whose immense strength belies their simplicity and contrast with the more deliberate and skilled use of other weapons; this typically extends to the club-wielders as well, who tend to be sorts with lots of strength and little intelligence or skill, reinforcing the association between clubs and primitives.

This trope is most commonly associated with, and often all but inseparable from, traditional portrayals of primitives of the prehistoric variety. Big, wooden clubs and crude stone maces are the archetypal weapon of the Hollywood caveman and the Frazetta Man alike. They aren't a rare sight among fantasy barbarians either, and are especially common as the weapons of choice of giants, trolls, ogres, cyclopes, and similar big, powerful and stupid humanoids. In these cases, it's fairly common for their clubs to be entire uprooted trees, sometimes just pulled up mid-fight to serve as improvised weapons. It should be noted that in real life, the oldest known man-made weapons were actually spears, not clubs, but spears have very different connotations in fiction (though to be fair, a random stick that was used to bludgeon a cave lion at one point is pretty hard to distinguish from one that wasn't).

In modern and futuristic settings, a nominally high-tech variant of this can occur in the form of primitive, thuggish or otherwise neo-barbaric characters fighting with whatever blunt objects can be scavenged for and used as improvised weaponry. Lead pipes and baseball bats are a classic mainstay, while uprooted street signs or fire hydrants turn up fairly often for the larger types.

Subtrope of Carry a Big Stick. Compare Dumb Muscle and Fantastic Race Weapon Affinity. Due to this association of strength and simplicity, clubs are also the favored weapon of the Smash Mook. Compare Boulder Bludgeon, which carries similar connotations but also has an element of pragmatism or desperation. Savage Spiked Weapons, where spiked clubs, mauls, morningstars and the like are used to communicate that a character is violent, savage and evil, is a sister trope.