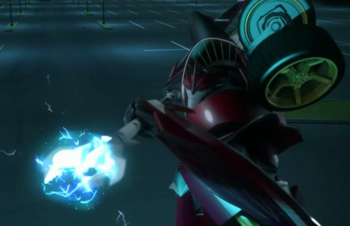 "Shock and drop."
"Sorry, Cap. This won't kill you, but it ain't gonna tickle either."
— War Machine warning Steve Rogers of the impending pain of being hit with a taser rod in Captain America: Civil War
Advertisement:

Put simply, this is a stick or club with the power to fire or channel electricity. This type of weapon is very common in Science Fiction where staff or baton-like weapons are used to shock prisoners as a way to pacify or torture them, though they may be used in open battle as well in short range or long range. They may also be used in Fantasy stories, appearing as Magic Staffs which fire or call down lightning. In more contemporary settings, this weapon will appear as a cattle prod.

This weapon is likely to be a Lawman Baton as it serves the double function of a police baton and a taser.

Named for the weapons used in Roughnecks: Starship Troopers Chronicles. Not to be confused with Stock Shticks.