Recap / Star Trek: The Next Generation S2E14 "The Icarus Factor" 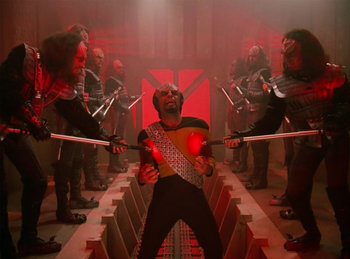 "Aaaaaauuuuuugggghhhhh!!!! Why do these painsticks have to be so painful?!?!"
Advertisement:

The Enterprise has stopped off at a starbase to examine a glitch in the computer as well as conduct some staffing changes. Picard takes Riker aside and informs him that he's been offered the captaincy of the starship Aries to conduct a long-range investigation of a new intelligent species. Riker is conflicted about leaving the Enterprise, even if it does mean his own command. He's further conflicted when he discovers that the mission briefing will be conducted by his estranged father, Kyle.

Riker receives his father coldly and is even more offended when he discovers that Kyle had a romantic relationship with Dr. Pulaski. Kyle makes an attempt to reconnect, but Riker has no interest, and Kyle quickly grows frustrated. The pair revert back to bickering and achieve no progress.

Meanwhile, Wesley notices that Worf has become more surly than usual for no apparent reason. He enlists Geordi and Data to find out the cause. Other than corroborating that something is amiss with the Klingon, they make no progress. Wesley eventually figures out that an important life event in Klingon culture is impending for Worf, but he has no one to conduct the ceremony with. Wesley enlists a few crew members as witnesses and arranges the ceremony to be conducted in the holodeck. Troi lures Worf to the ceremony, where he undergoes the Macho Masochism expected of a Klingon warrior. Afterwards, Worf is exhausted but grateful.

In parallel, Riker and his father have agreed to settle their differences with a match of anbo-jyutsu. In between rounds of combat, they express their feelings about each other and Riker's late mother. Eventually Riker realizes that Kyle is cheating. In fact, he's been cheating to defeat Riker since childhood to keep the boy motivated to get better. Riker finally accepts that his father does want the best for him, and they reconcile their differences.

Troi and Pulaski lament that men need such macho pursuits to satisfy their primal instincts, but they admit that it's part of what makes men so exciting.

In the end, the glitch is resolved and Riker elects to remain in the Enterprise, where he feels he belongs.