Wants a Prize for Basic Decency 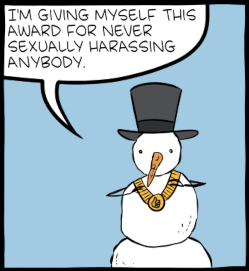 Black Mage: I can't believe the nerve of that anchor guy.
Red Mage: Still, you didn't have to kill him.
Black Mage: Hey, I waited until the cameras were turned off. You ask me, that's a crap load of control there.
Thief: Not immediately indulging in murder isn't a sign of self-control. It's a sign of, what is it, sanity.
— 8-Bit Theater
Advertisement:

Some people just aren't good by default. Where most people cleave to good behavior more or less naturally, this one does not, either through being a Jerkass or an outright villain. They need to be pushed and prodded — by themselves and others — into being a decent person, and because this process is a struggle for them and because their good behavior is above and beyond how they might be acting otherwise, they believe they deserve exceptional acknowledgement for their efforts.

This person Wants a Prize for Basic Decency. A character expects extra kudos for behaving in a situation like a decent human being instead of a Jerkass, even though basic humanity is expected of others by default.

It can inspire Then Let Me Be Evil if the character is treated as a real villain despite their good deeds.

Compare It's All About Me, Entitled to Have You, Dogged Nice Guy, and Condescending Compassion. For a similar phenomenon in advertising, see Asbestos-Free Cereal.

Furthermore, there is the idea of Blue-and-Orange Morality coming into play, where the person has inhuman and or bizarre morals and standards to where what would count as "basic human decency" is actually legitimately very difficult and or alien for them to accept and go through.

Alternately, outside sources or some Fatal Flaw for the person means that achieving human decency in some form or fashion is difficult.

Likewise, someone who is simply pointing out that they do not conform to some fashionable/goodthinkful False Dichotomy of characterization will often be mistaken for this trope.

Lastly, other factors such as Values Dissonance can come into play; after all, what could be taken for granted as basic human decency in one setting may be seen as very progressive where the subject comes from. For these reasons, among many others, no Real Life examples, please!

It should also be noted that in real life, indulging this trope is probably the best course of action. Positive enforcement is a powerful tool for building behaviors, so if you want an otherwise bad person to keep being good, then prizes are quite effective. (Assuming the prize isn’t more than you’re willing to pay for a baby step toward reforming a Jerkass.)

Customer of the Week

Lois wants to be validated and feel like she's accomplished something, however, Stewie points out that she's only been doing the bare minimum and doing things she was expected to do as a customer.

Alternative Title(s): Virtue Is Its Own Reward

Customer of the Week

Lois wants to be validated and feel like she's accomplished something, however, Stewie points out that she's only been doing the bare minimum and doing things she was expected to do as a customer.