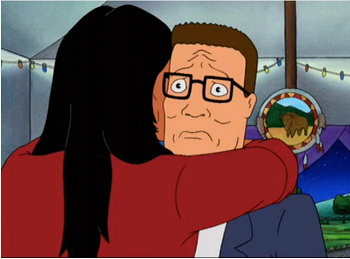 "Wow. I am so uncomfortable right now."
"Love? What kind of man tells another man that he loves him?"
— Cotton Hill, King of the Hill
Advertisement:

In fiction, every guy usually follows the Bro Code. One of the rules of the Bro Code is that guys do not hug each other. They also don't talk things out or get emotional, because that's what chicks do; either that, or it's gay. Sensitivity is never a priority for guys, no matter how they appear on the surface. Every guy is like this, even the most understanding guy will not want to seem sensitive, for fear of being called a pussy or "gay".

Also, don't expect teenage boys to be sensitive even with their own fathers. After a rare personal talk, no matter how short, always expect an awkward silence followed by a throat clearing, and a quick mumble of "I gotta go" or "that was a good talk, son". You can also expect lots of nervous handshakes, but never a hug, at least not any longer than three seconds.

This is a relatively recent trope and of varying geographical distribution. Until around the eighteenth century, it was expected of "men of sensibility"* until some time in the 19th century, "sensibility" meant something rather more like what we would call "sensitivity" to show their emotions much more openly (as in The Song of Roland, in which the heroic French weep and faint away in groups of twenty thousand at a time). Even PDA between males was much more common as little as a hundred and fifty years ago, though generally more restrained in Anglophone countries (with their Puritan traditions) than elsewhere. (Nineteenth-century English diarists record their horror at seeing male Frenchmen and Germans kissing each other on the mouth, though this gesture had been actually more common among all genders in England than elsewhere up to the time of the Civil Wars.)

This is a huge Double Standard, as it implies that men to show affection are weak and/or swing the other way, but it is normal for women to do the same. Said double standard also underlies many cases of Shipping Goggles; if a pair of male Heterosexual Life-Partners in fiction are more affectionate to each other than what is commonly expected for men, expect shippers to pair them up even if the work never intended to portray them as a romantic couple at any point.

As the title implies, examples of this trope are almost Always Male, but inversions are welcome. This also only usually applies to male bonding.