Film / Back to School 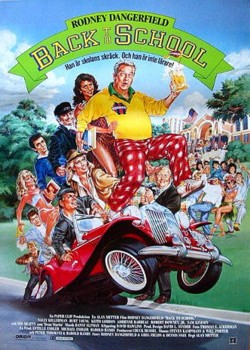 Thornton Melon's got it good: he has an extremely successful line of "Tall & Fat" men's clothing stores that he built up from a small New York clothier shop, and a beloved son who's off making grades, making friends and earning victories for his diving team at college. Thornton's also married to a shrewish, unfaithful wife who- *Whirrp!* wait, nevermind that last part.

Newly separated from his shrewish, unfaithful wife, Thornton decides to head off to the university to visit his son, Jason. Once he gets there, Jason has to spill the beans on how college life is working out: he lied about the grades, the friends and the diving team and he's about to drop out. Thornton can't quite convince him not to, seeing how he never went to school and things turned out fine.

With that, Thornton decides -what the hell- he's enrolling too! He gets in good with the Dean by addressing all of his concerns with a big, fat donation, and before long becomes the #1 party animal on campus. Just a few things stand to ruin Thornton's fun, though: a stuffy economics professor who doesn't appreciate Thornton buying his way through school, and a son who's beginning to develop the same gripe. Fortunately, Thornton also falls for a beautiful and very intelligent Poetry professor who sees that he can excel in his studies if he makes a real effort at it, but will he?

While perhaps not as well-known as Caddyshack, Back to School is one of Rodney Dangerfield's funniest films and is definitely worth checking out for any fan of 80s comedy or the man himself. The other most notable thing about this film is that Derek Savage (yes, that Derek Savage) appears as an extra.