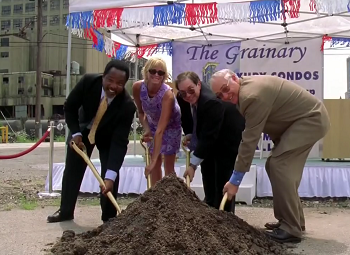 This is where there is a ceremony to celebrate the completion of some edifice, like a bridge, road, building, ship, etc. Although ships are different in that they don't have a ribbon cutting but a champagne bottle breaking.

This ceremony usually has a large red ribbon tied between the front doors or arches of said edifice, huge scissors and a politician who cuts the ribbon while announcing that the X is now open.

A similar related event is a ground-breaking ceremony, which indicates the start of a building project about to get underway.

Truth in Television, it's a great publicity event for those involved. Actual ribbon not necessary.