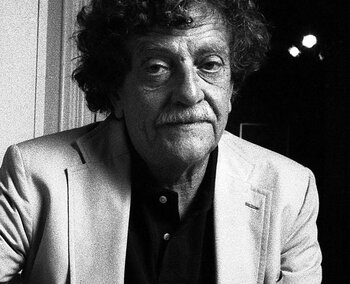 11/11/22-4/11/07. So it goes.
"Many people need desperately to receive this message: I feel and think much as you do, care about many of the things you care about, although most people do not care about them. You are not alone."
—From Timequake, his final novel
Advertisement:

Listen: Kurt Vonnegut Jr. (November 11, 1922 — April 11, 2007) was an American science fiction writer. His work is known for its satirical, anti-authoritarian, humanist, absurdist and often brutally depressing worldview. If this worldview can be pinned down to one event, it would be the bombing of Dresden.

Despite having been an active anti-interventionist in college, Vonnegut enlisted in the US Army during World War II. During the Battle of the Bulge, he was captured by the enemy and brought to Dresden. Dresden was a German city known for its doll-making which, after conversion to war-production, produced light infantry equipment that was only of marginal military value. Because of those industries, and the railway lines which passed through it (and enabled German industries to continue functioning through the continued transportation of resources across the country), like all other German cities it was fire-bombed by the western Allies as part of their campaign to reduce German armaments production. Around 25,000 civilians died. So it goes. This event would become a major theme in many of his books, especially the later ones.

Vonnegut is also notable because he was one of the first modern science fiction authors to get serious attention in the literary world. Although your literature professors (and Vonnegut himself) may try to tell you he's not actually a science fiction writer, the aliens and time-travel seem to disagree.

A full decade after his death, the editors of an omnibus of his work discovered five short stories from the early '50s (i.e., before any of his most famous work) that had never been published and put them in the book, first posting one online for free as a tease.

Vonnegut's novels with their own pages:

Examples of tropes from his other stories

A Man Without A Country