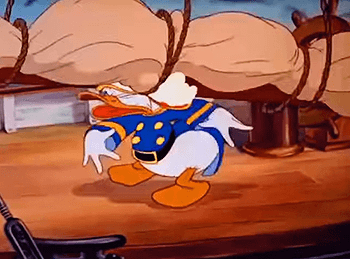 That's why they call it the "Boom"!note  Don't Explain the Joke—For the sound it makes when it hits you in the head. Not really, but an old sailing joke.

In some cases, the target of the boom will get a warning that it's coming... but usually the warning comes a mere second before the impact, doing the target no good whatsoever.

Very much Truth in Television. When the boat is jibing (changing the sail orientation by moving the stern into the wind, as opposed to tacking, turning the bow into the wind), the boom can very suddenly swing across the deck at high speed, which can lead to a concussion (or worse) for anyone not paying attention. Keeping your head down is one of the first things taught to beginning sailors.