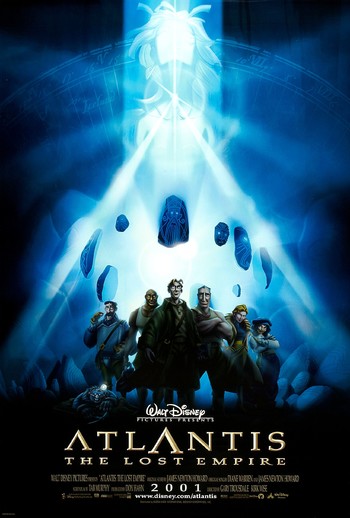 "Atlantis is waiting..."
"...in a single day and night of misfortune, the island of Atlantis disappeared into the depths of the sea."
— Plato, 360 B.C.
Advertisement:

Entry #41 in the Disney Animated Canon, this 2001 movie begins with a great cataclysm that occurred in the distant past which swallows up an entire, highly advanced civilization. Only through the Heroic Sacrifice of the queen is the civilization spared complete destruction, but to the rest of the world, it seems as if it was wiped from the face of the planet...

Flash forward to 1914. Milo Thatch, a young, poor, orphaned linguist, has uncovered evidence of the existence of a great civilization in the past, Atlantis, which was previously thought to be just a myth. Despite his breakthroughs in deciphering clues hidden in the writings and legends of many disparate cultures, his ideas and his proposed expedition—to find "the Shepherd's Journal" and follow its instructions to the lost city itself—is rejected outright by his peers. However, a mysterious woman steps in and offers him a chance to prove his theory, backed by the mysterious billionaire Mr. Whitmore, who knew Milo's grandfather and had agreed years earlier to help finance Milo's expedition.

Once Milo meets Whitmore and convinces him of his own personal determination and commitment, he is invited to join an expedition that is setting out to make the unprecedented trip to Atlantis itself. The rag-tag team is led by Commander Rourke, a straight, no-nonsense military man, who also knew Milo's grandfather and worked with him on the previous expedition where they found the Shepherd's Journal. Once they arrive at the destination from which they might never return, they discover an underdeveloped, dying society that has abandoned and forgotten their written language — and Milo becomes a translator between the two cultures. However, it is revealed that there is an ulterior purpose to the expedition that Milo is unaware of, and his compatriots are not all that they seem.

While a sequel named Shards of Chaos as well as an animated TV series named Team Atlantis was under development, the film's somewhat disappointing performance at the box-office lead Disney to cancel both the sequel and the series, the latter of which was a bit into its production. Instead, the completed material for the series was reworked into a Direct to Video sequel film named Atlantis: Milo's Return.

The film was accompanied by three tie-in video games. Atlantis is also the third Disney Animated Canon film to be rated PG in America, with the first being 1985's The Black Cauldron and the second being Dinosaur in 2000 (Dinosaur, however, was only added to the Canon in 2008).