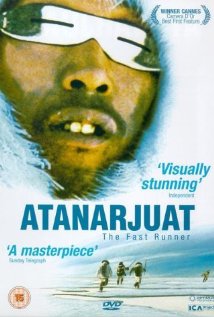 A 2001 Canadian film with the distinction of being the first feature film written, directed and acted entirely by Inuit people in their own language. Set in an indeterminate time before European contact, the story is based on a folk legend of betrayal and revenge recounted by 19th-century explorer George Lyon in his journals.
Advertisement:

The mysterious shaman Tungajuaq arrives at a community led by Kumaglak, and through some magical means brings about Kumaglak's death and passes leadership to his son Sauri. Sauri retains the position despite the objections of Tulimaq, and their hostility is continued between their respective sons as they grow up. This becomes especially acute when Atuat, the woman promised in marriage to Sauri's son Oki, shows a clear preference for Tulimaq's son Atanarjuat. Atanarjuat wins her in a ritual duel with Oki.

The Sauri family moves away and Oki finds another wife, so when Atanarjuat visits them while caribou hunting a couple of summers later they greet him warmly. Oki's sister Puja gives him an extra warm greeting, to the point that Atanarjuat takes her back home with him as a second wife. However, she doesn't get along with the other women in the camp, and when she's caught in a compromising position with Atanarjuat's brother, fisticuffs break out. Puja goes crying to her father and brothers that her husband tried to kill her. Oki and his brothers ambush Atanarjuat and his brother as they sleep in their tent, and then things really hit the fan.

Atanarjuat swept the 2002 Genie Awards and won many festival and critic awards in the U.S., though it was not nominated for an Academy Award or a Golden Globe.