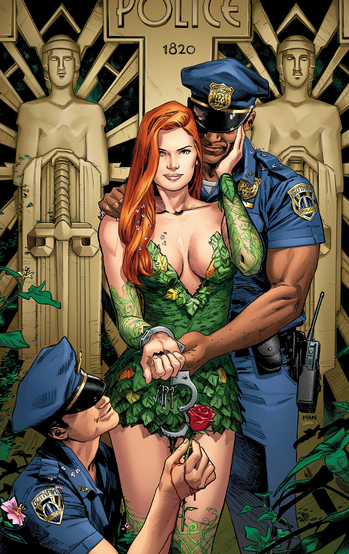 "Oh such grace, oh such beauty— so precious, suspicious, and charming, and vicious,
Oh darling, you're a million ways to be cruel."
— OK Go, A Million Ways
Advertisement:

A classic character type, the beauty who uses her femininity and her sexuality as a weapon to undermine a moral and upright man, for evil purposes. She's evil and sexy, a liar, a manipulatrix and a sneak, and uses the good guy's sympathy against him, often with a sob story about her mother and some hospital bills or a Wounded Gazelle Gambit.

Unlike the Femme Fatale and the Mad Scientist's Beautiful Daughter, and even the Dark Feminine, she is rotten to the core, and will never be swayed from the path of darkness by love. (In eras where Makeup Is Evil applies, expect her to paint when no other woman does.)

The name comes from Rudyard Kipling's 1897 poem "The Vampire." It was popularized by the 1915 silent film A Fool There Was, which quoted liberally from the Kipling poem. It quickly became a trope of classic silent films, where this character is part of a standardized plot. A red-blooded American boy must choose between his familiar, cutesy-plain sweetheart and this seductress.

This trope is Cyclic. In certain eras, as with the "hat dichotomy" from Westerns, but more actual in fact, The Vamp is almost always black-haired, whereas the good girl is a blonde. In the Cold War era, the raven-haired temptress was a Soviet spy, when not just a torturer like The Baroness. At other times, blondes are inherently more evil. And of course, always keep an eye out for an Evil Redhead or two in the mix.

She may either wear a red dress or black lingerie.

Although the name is derived from "vampire," this character is most commonly a normal human, but some supernatural entities are known to influence men in this way. Succubi and Sirens are known to lure men in to be eaten or drained of Life Energy, or occasional literal vampires use their supernatural beauty and wit to lure male prey to their deaths, for example.

Expect some praying mantis imagery for these characters, as female mantises have been known to eat their mates' heads after mating (although the prevalence of this habit is greatly exaggerated in the media).

Compare with the Femme Fatale, the somewhat more sympathetic (and often less overtly sexual) version of this character (which may overlap with this trope if the character has an ambiguous agenda), and The Casanova. Often overlaps with the Black Widow, who is just a particularly successful Vamp, Gold Digger, who is motivated by greed for the target's wealth, and Intentional Heartbreaker, for when she strings the guy along for a while. See also Villainesses Want Heroes. Literal Man Eater is when this character literally eats the men she seduces.

Contrast with the Heroic Seductress, The Vamp's direct Counter Trope, who uses sex for noble and heroic purposes. Also contrast the Proper Lady, who saves it for her own man.

Not to Be Confused with the other Vamp.