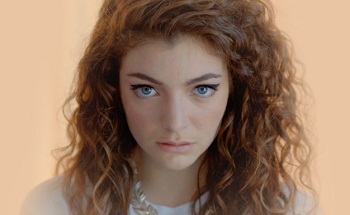 Ella Marija Lani Yelich-O'Connor, better known by her stage name of Lordenote Derived from her fascination with "royals and aristocracy", with an "e" added after the name Lord to make what she considered a masculine word more feminine (born November 7, 1996), is an Indie Pop singer from New Zealand. Often credited as the Trope Maker for the Bedroom Pop genre that would gain widespread prominence by the end of the 2010s, her music usually deals with the problems of adolescence, paralleled with her own rise to fame.

Her debut release, The Love Club EP, went #2 in her own country, and her songs "Royals" and "Tennis Court" went #1. In September 2013, she released Pure Heroine worldwide, which gained critical acclaim for its production and lyrical content. It gained an Updated Re-release in December 2013, featuring a bonus track, "No Better", songs from The Love Club EP, and the "Tennis Court" B-side "Swingin Party".

She also reached a new height of fame when it was revealed at E3 2014 that her cover of "Everybody Wants to Rule the World" by Tears for Fears was used in the cinematic trailer for Ubisoft's Assassin's Creed: Unity, and it was then revealed that she would be "curating

" the soundtrack for the first part of the final The Hunger Games movie (Mockingjay).

Lorde released her sophomore album Melodrama in 2017. It features new sounds, and has a distinctly different feel to it based off her experience of rising to international stardom. She also collaborated with British duo Disclosure, producing the track "Magnets" for their second album. In the same year, she made multiple festival appearances for the first time since 2014, including Coachella and Governors Ball.

In June 2021, she released "Solar Power", the lead single off her third album of the same name. The album was originally meant to be released the previous year but was delayed extensively due to COVID-19 travel restrictions to New Zealand. She later revealed that the album would only be released digitally and on limited-edition vinyl due to environmental concerns.

Really, really should not be confused with Lordi - although she's confirmed

her stage name is pronounced as "Lord", not "Lord-ee".

She is also definitely not a 45-year-old geologist from Colorado.

And we'll never be royals.