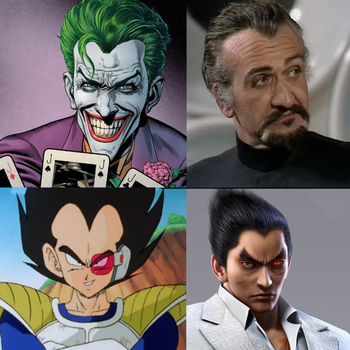 In real life, the widow's peak (a distinct point in the hairline in the center of the forehead) is a result of a lower-than-usual position of the intersection of the bilateral periorbital fields of hair-growth suppression on the forehead and is a dominant inherited trait. The term widow's peak is from an old wives' tale saying that hair growing to a point on the forehead is an omen of early widowhood.

For some reason, in fiction, it seems like it's also an omen of becoming the villain (or, at least, becoming one big badass). Maybe because it makes one's hairline look like Angry Eyebrows or Horns of Villainy.

Actually, in some villains this may be because of weird pattern balding, where the hairline recedes on either side of the center just a bit, as a sign of the stress of their job.

Often seen on a Classical Movie Vampire. Can overlap with Forehead of Doom. See also Bald of Evil, where there's no hair left up top.