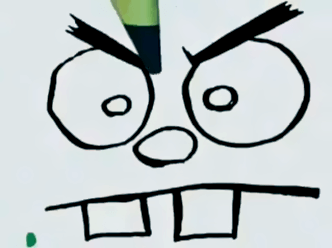 If you can't like him at his mehoy, you won't love him at his minoy.
"Prepare to meet... Mr. Angry Eyes!"
— Mr. Potato Head, Toy Story 2
Advertisement:

A normally peaceful or serene character wears a serious frown after getting quite a pummeling. Or maybe a fighter stops the common trash-talking chitchat.

If an enemy is unlucky, the camera will focus on the character's expression changing in a significant way, indicating they're about to go all out on them or die trying. If it's accompanying a physical transformation or costume change, it pretty much indicates the enemy is about to get owned.

Named after the very noticeable and atypical angry contorted face on an otherwise-normal character when this occurs.