Not in the Face! 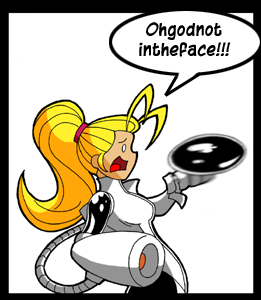 Even in a world of bondage, no one likes being hit in the face.
"Not the face!"
— Every character on this pagenote Besides Face McShooty, obviously
Advertisement:

A character does not want to be struck or injured in a certain manner. They could have a low pain tolerance in general, or they may be able to take other kinds of punishment, just not that specific punishment. In these cases, it isn't uncommon to hear a character desperately shout this Stock Phrase at their attacker.

Usually the character gets hit in the face anyway. Often subverted when it turns out that the character's pleas were just Briar Patching all along.

Can involve, but doesn't demand, A Handful for an Eye, Boom, Headshot!, and if someone's being particularly vindictive, Face Palm Of Doom. Compare Ow, My Body Part!, Oh God, with the Verbing!, Nobody Touches the Hair. Not to be confused with actually going inside the face.

And at the end of the movie...
Hallenbeck: (to the ingrate Senator whose life he helped save) Head or gut?
Sen. Baynard: Huh? (gets punched in the face and the gut)

Punching Narcis Prince in the face causes him to get angry and fight much more aggressively.

Alternative Title(s): Not The Face

Punching Narcis Prince in the face causes him to get angry and fight much more aggressively.