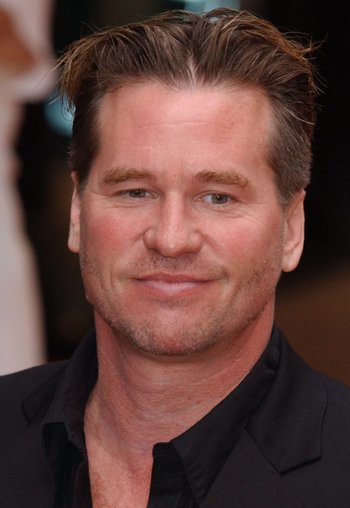 "I'm a character actor, but I look like a leading man."
Advertisement:

Val Edward Kilmer (born December 31, 1959) is an American actor born in Los Angeles, California. He's known for playing Iceman, Jim Morrison, Doc Holliday, Batman, and Moses. He really likes to prepare himself for his roles, as some of his fellow actors have noted.

He remained the youngest actor ever accepted into Julliard's drama program for many years. For a time in the 90s it looked like Kilmer was going to become one of Hollywood's truly elite A-listers, especially after the success of Batman Forever. However, his career began to slow after he developed a reputation for being difficult on set and appeared in a string of movies that did badly at the box office. Although he had a brief resurgence in the 2000's, with several critically acclaimed turns in smaller projects, his filmography began being filled with direct-to-DVD projects - this seems to be due at least in part to his unfortunate reputation of being difficult to work with. Roles in more mainstream films are painfully rare. He also developed projects and curricula about Mark Twain, a personal hero of his, including one-man shows in which he played him.

His career was almost completely sidelined by throat cancer, which he kept hidden for over a decade. Complications have resulted in the continued use of a tracheotomy tube that prevents him from speaking louder than a squeak, which he has managed to circumvent with the use of an AI-generated voice resembling his former voice (you can listen to it here

). He's since shifted his focus towards painting and outreach programs to encourage students to pursue the arts and theatre.

Fittingly, like the real Jim Morrison, Kilmer is a musician as well, having released a CD in 2007.

From 1988 to 1996 he was married to British actress Joanne Whalley, whom he met while filming the sword and sorcery film Willow (and would star opposite for a second time in the thriller Kill Me Again). They had two children, daughter Mercedes and son Jack, who is also an actor.