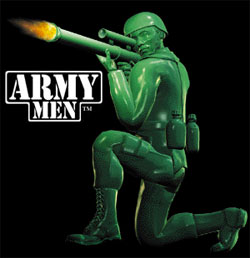 Real combat; plastic men.
"A world exists that's quite different from our own. There, a battle rages out of control. A battle between good and evil... Green and Tan."
—Intro to Army Men: Sarge's Heroes
Advertisement:

Army Men was a popular series of Video Games by the now-defunct The 3DO Company, about a war among several factions of plastic Army Men. The game was inspired by the developers' childhood memories of playing with miniature Army Men. The series lasted from 1998 to 2003, when 3DO went bankrupt. Many fans of the series laud the initial games' more "family oriented" take on the shooter genre. After Army Men: Air Attack, the brand started suffering from lower quality sequels and spinoffs (let's not talk about a certain game starring Sarge's war journalist girlfriend). Since 3DO went under in 2003, various other companies have since tried to make games based on the Army Men brand until 2008.

Canonically unrelated to this series, The Mean Greens - Plastic Warfare

was released on Steam as a multiplayer-only game giving a Lighter and Softer take on the idea of plastic men in warfare with maps ranging from a simple team deathmatch on a Tabletop RPG board, Capture the Flag in an aquarium or even a game of soccer on a foosball table. The first three games (Army Men, Army Men II and Toys in Space) as well as RTS can now be purchased at GOG.com