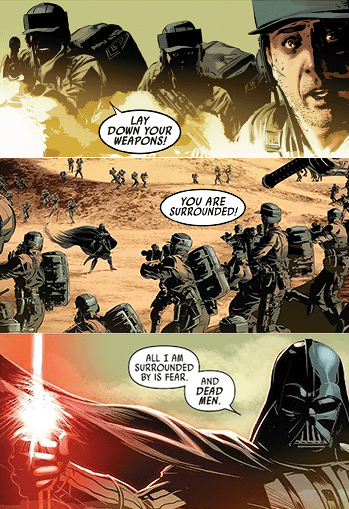 Congratulations, you have Darth Vader at blaster-point. What was your plan again?
"I will not yield,
To kiss the ground before Young Malcolm's feet,
And to be baited with the rabble's curse.
Though Birnam Wood be come to Dunsinane,
And thou opposed, being of no woman born,
Yet I will try the last. Before my body
I throw my warlike shield. Lay on, Macduff;
And damned be him that first cries: 'Hold, enough!'"
— Macbeth, Macbeth, Act 5, Scene 8.
Advertisement:

This is one method for avoiding doldrums from having an Invincible Hero. Scenes of Villainous Valor show the antagonists to be outmatched, forcing them to rely on daring, cunning, skill, and determination to hold their own against the heroes, or at least go out with a little dignity. They sometimes even continue a hopeless battle for higher reasons than spite! This often results in a tense back-and-forth as the heroes' raw power is set against whatever the villains brought.

Sometimes they win, sometimes they lose, but the mark of Villainous Valor is that it sees the "bad guys" using tropes that you wouldn't expect from them. In fact, if you were just tuning in, you might even be confused about who you're expected to root for. A fight between the Knight in Shining Armor and The Dragon with his Spikes of Villainy will often leave you cheering for The Hero, but what if The Dragon locks swords with the hero and gets between them and his master, to give the latter time to escape? What if The Dragon is seemingly struck down, only for her Undying Loyalty towards her master and her sheer, unbroken will to spur her into a full-blown Villainous Second Wind? The scene changes completely.

This often appears in shows where the villains are sympathetic or the heroes questionable. Nevertheless, this is not a trope about viewer sympathy so much as bravery, ingenuity and skill on the part of a villainous underdog. If the villains are acting more like the soon-to-be-slaughtered protagonists of a horror film, we might be looking at a Mook Horror Show instead. Contrast David Versus Goliath, where the hero is the weaker one. For villains fighting politely instead of bravely (though they can overlap), see Mook Chivalry.

Of course, fortitude in the face of adversity is not necessarily always a redeeming quality; sometimes, if the villain had slaughtered The Hero's entire family, driven by a desire to inflict needless suffering, then subjected the hero's Love Interest to Cold-Blooded Torture, before explaining his evil plan to destroy the city all while maintaining an even tone of voice, their refusal to back down without a fight can serve to demonstrate an enjoyment of combat, a stubborn refusal to allow the hero to dispense clean justice, or otherwise demonstrate that the villain does not even value their own life, let alone that of anyone else.

Compare Worthy Opponent. See also Evil Virtues. This sort of behavior is the staple of the Noble Demon, and the Blood Knight. For when the villain finds something to respect in the hero, see Villain Respect.

This trope also has a complicated relationship with Bad Guys Do the Dirty Work, wherein villains are capable of being depicted committing actions that are from a logical point of view beneficial to the protagonist and also entirely necessary but would conflict with a protagonist's moral code; when the villain does this in a self-sacrificing or at the very least supremely cool manner, then it combines the two tropes. However as often as not, the villain really is doing actually reprehensible things that just also happen to require astonishing resolve and bravery to pull off.