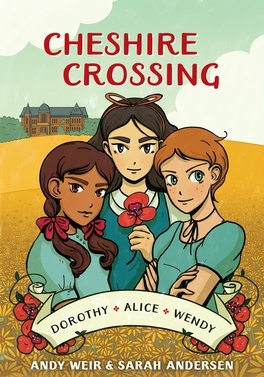 is a Crossover fantasy webcomic by Andy Weir in which Alice Liddell, Wendy Darling and Dorothy Gale are brought to an Extranormal Institute-style Boarding School run by Ernest Rutherford, so they can be taught to master their latent superpowers by Mary Poppins. Action and adventure ensue.

The comic also features the Wicked Witch of the West, Peter Pan, Captain Hook and Tinker Bell, the Knave of Hearts and the Mad Hatter and Lemuel Gulliver.

Four issues were released, forming a pretty self-contained story arc, before the series came to an unannounced halt. The author later said

he didn't intend to continue it, and had given up on drawing comics unless he decides to hire a professional artist.

And, guess what! That very thing happened, years later, as the comic was rebooted in 2017, now with Sarah Andersen as artist. The new comic

is found on Tapastic and seems to be adapting the original plotline rather faithfully. Unfortunately, a portion of the comic is behind a paywall, but at least you no longer need an Android or iOS app to unlock it.

A graphic novel collecting the early part of the storyline was released on July 9, 2019.