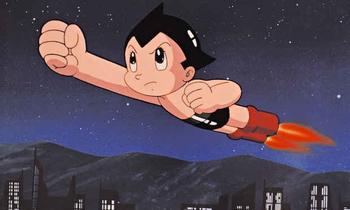 To infinity and beyond!
"Put your arms forward, like Superman!"
— Hogarth Hughes, The Iron Giant
Advertisement:

The classic Flying pose: stretched out, with one or both arms forward of/above the head. In both cases, this creates the illusion of 'obvious' aerodynamicness, as the resulting shape looks vaguely bullet or gooselike, since the human body tends to look very silly in flight otherwise.

There is a very early example in the third panel of the children‘s strip Mr. Twee Deedle for January 26, 1913, by Johnny Grulle.

From Superman's catch phrase, originated on radio to indicate to the audience when he was taking off, in his earlier cartoons and comics.